Next Generation DDoS Mitigation: How To Amp Up DDoS Testing to Stop Today’s Multi-terabit Attacks 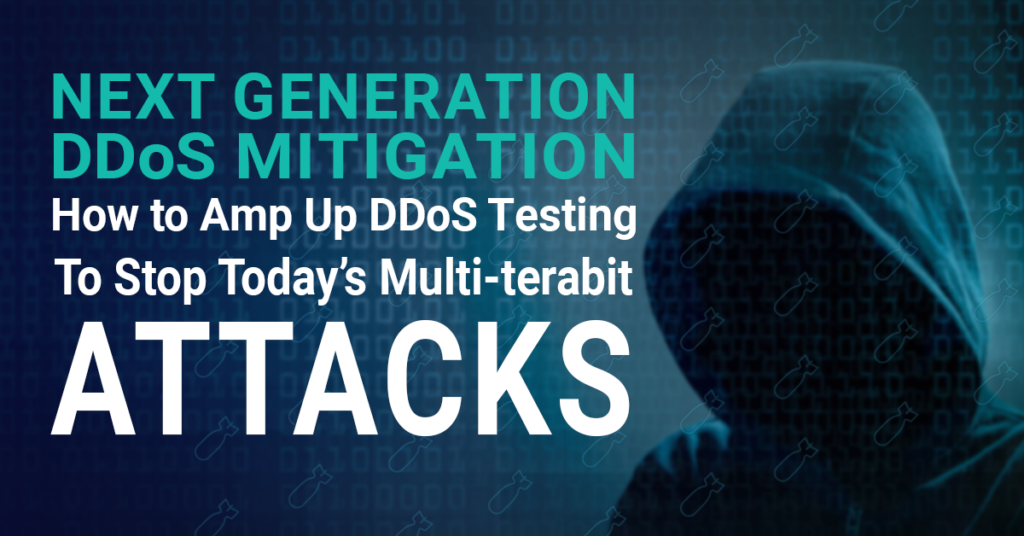 You may be thinking: Why do we even still have distributed denial of service (DDoS) attacks in 2022? Two reasons:

Trends show the gap may be widening, but emerging best practices could put time back on defenders’ side . . .

For only $500, anyone can pay for a DDoS subscription service to launch a DDoS attack.

DDoS attacks have wreaked havoc for nearly 40 years since a high school kid launched the first one back in 1974 (before SecOps was even a thing). The fundamental goal of Denial of Service (DoS) hasn’t changed:

To shut down normal business operations by overwhelming a website, service, or underlying network infrastructure with a flood of simultaneous requests.

Sort of like a Starbucks drive-thru at 8AM on Monday morning, only with devastating consequences and no cranberry scones. While the basic principle remains the same, DDoS attacks have evolved into a massive and time-tested industry.

Malice, greed, and political pressure still top the list of motives driving DDoS attacks. Virtually any company—or any virtual company—may now be targeted, from cloud providers and e-commerce portals to financial brokerages and the Ubers of the world.

In commoditizing DDoS, threat actors made a formidable weapon available to just about everyone through marketplaces on the Clearnet and Darknet. The process became more efficient such that, even as slightly fewer attacks succeed, the cost to businesses targeted continues to rise. Today’s campaigns cost businesses $22K per minute (Ponemon) and more than $200K per attack in 2021 (Radware).

Today’s highly orchestrated and commoditized attacks bear little resemblance to their early ancestors in that they:

DDoS attacks initially resemble spikes in legitimate traffic which makes them harder to spot, and defenders slower to respond or even recognize the telltale signs:

DDoS may now furnish one element of multi-vector “triple extortion ransomware” attacks aimed at squeezing higher payouts from ransomware victims. Cybercriminals might also use it as a smoke screen to divert resources away from more sophisticated campaigns like malware insertion or data exfiltration.

Campaigns that cycle attack vectors or target multiple layers of the stack make it harder to flag anomalies. Threat actors might also combine bursty attacks on DNS servers with attacks rooted in encrypted (SSL/TLS) to make it harder for defenders to detect and understand when and where they’re under attack.

Above All: Size Matters

Research shows the game-changing aspect of today’s DDoS attacks isn’t the frequency, technique, success rate, or even the complexity, but rather, the sheer speeds involved. According to NIST:

During any attack, the defenders’ goal is the same: to maintain business operations while quickly detecting and shutting down incoming threats. As DDoS attacks matured into a lucrative industry, the DDoS mitigation industry grew up around stopping attacks. DDoS mitigation refers to the process of protecting targeted networks and servers using dedicated equipment or cloud-based protection services.

Experts project the DDoS Protection and Mitigation Security Market to reach $8B in 2027 as emerging best practices put time back on defenders’ side.

Modern DDoS mitigation solutions and strategies also include deploying specialized Web Application Firewalls (WAFs) between your servers and the Internet to filter requests and detect DoS techniques. WAFs intercede by applying custom rules set by IT in response to attacks.

Along with service providers and manufacturers of network equipment (routers, switches, servers, firewalls), eCommerce providers and enterprises with a large web presence rely on DDoS mitigation to maintain business continuity and reputation. The trick is to make sure it all works as advertised.

Putting DDoS Mitigation to the Test

If you can easily tell the good guys from the bad, thwarting DDoS becomes a race against time. When you can’t, you need greater agility, more practice, and a wider range of proven responses to minimize downtime, avoid financial losses and aggravate as few customers as possible. For example, simply throttling back on bandwidth or rate-limiting the volume of requests a server will accept won’t make anybody happy (even if it slows an attacker’s roll temporarily).

To be as ready as you can, you need to test existing and prospective DDoS mitigation solutions and procedures before you invest, while evaluating third-party risk, and during day-to-day operations. Proof that mitigation works as promised may also impact compliance and cyber insurance premiums.

The first step in giving defenders more time is understanding the normal behavior of your applications and recognizing anomalies. These might include service degradation, user complaints, and deviant usage patterns. Visibility should entail user-configured alerts that signal analysts when traffic exceeds predefined thresholds and real-time telemetry to speed investigation.

The next step is to simulate attacks that might resemble your normal traffic to evaluate the ability of monitoring tools and mitigation teams to respond. Validating your ability to detect and disrupt today’s massive-scale DDoS/ransomware campaigns requires four vital simulation capabilities:

STEP 1: Configure an Attack and Target

Users configure DDoS Storm to act as the attacker (using one port) or both the attacker and target (two ports). One or multiple targets can include firewalls, routers, DNS or web servers, or DDoS mitigation services and features related to eCommerce portals.

Thorough testing requires generating traffic from specific regions. Administrators can use DDoS Storm’s interactive world map to specify the makeup of an attack, defining when, where, and how many devices will be contained in the bot used to launch the campaign.

Attack profiles specify the percentages of traffic coming from each region and whether the attack loads all at once or ramps slowly over time. Attacks can be launched against actual devices (simply type in the real target IP address) or DDoS Storm can simulate target devices to avoid disrupting production defenses—or, in evaluating prospective new solutions prior to purchase.

Last but not least, select which layers to target. Testers can drag and drop to select one layer or a mix of Layer 2, 3, and 4-7 traffic. The Apposite test library features 128 pre-defined attack variations.

Here, you’ll see how many packets were sent and received by targets with graphs illustrating packets per second (PPS), throughput, and latency for each attack stream. If all the simulated DDoS packets were identified and dropped, defenses are working effectively. If too many packets reach the target, devices or configurations may be updated and tested again.