What is RFC 2544? Performance Benchmarking Methodology for Network Devices 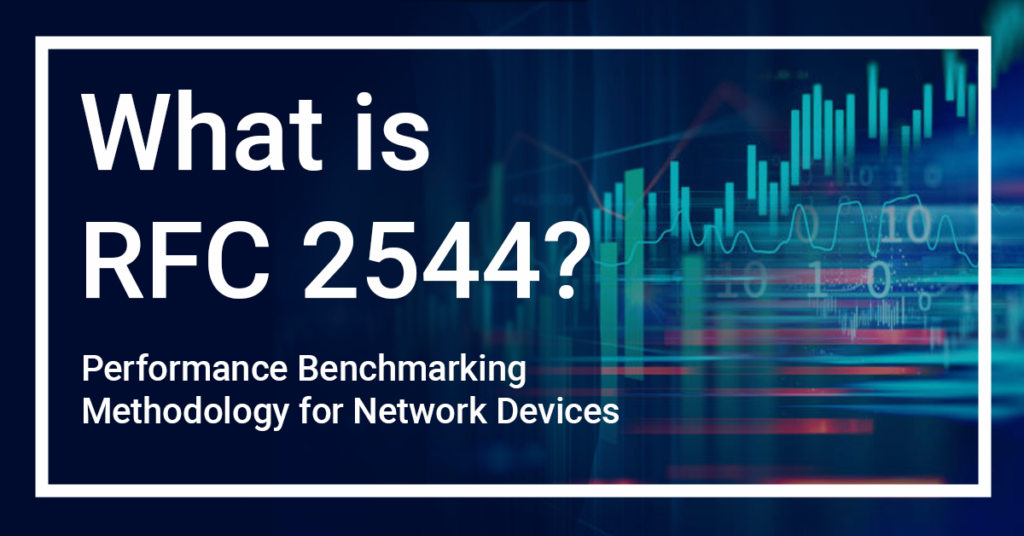 If you work in networking you’ve probably heard of it, but what exactly is RFC 2544? Request for comment (RFC) 2544 is a benchmarking methodology created in 1999 for testing and measuring the performance of network devices.  By providing a common language and set of procedures for network engineers,  RFC 2544 delivers standardized performance results that enable users to easily compare devices across different vendors.

The RFC includes 6 subtests that are designed to evaluate how a device will act in real-world scenarios. These tests are considered out-of-service, meaning the real network traffic must be stopped so that the tester can generate traffic with specific characteristics.

As outlined in the RFC document, the ideal way to implement this series of tests is to use test equipment with both transmitting and receiving ports.  Traffic is sent from the tester to the DUT and then from the DUT back to the tester. By including sequence numbers in the frames it transmits, the tester can check that all packets were successfully transmitted and verify that the correct packets were also received back.

Throughput refers to how much data can be transferred from one location to another in a certain period of time. The throughput test measures the maximum rate at which the count of test frames transmitted by the DUT equals the number of frames sent to it by the test equipment. Or in other words, it determines the rate at which data can travel with zero dropped packets by the device under test. This measurement roughly translates into the available bandwidth.

Latency is the time it takes a frame to get from sender to destination. It is the sum of both processing and propagation delays when traveling through a network device or across the network and back to the test port. In order to measure latency a test frame is transmitted through the network containing a time stamp, and that time stamp is checked when the frame is received.

Frame Loss is defined as the percentage of frames that were successfully transmitted from the source but were never received at the destination. Since frame loss is usually caused by a lack of resources, this measurement acts as an indicator of how a device will perform under a heavy load.

System Reset measures the speed at which a DUT recovers from a hardware or software reset or a power interruption. A System Reset test is performed by sending a continuous stream of frames during a reset process and monitoring the output until frames begin to be forwarded. The System reset measurement is the time between when the last frame of the initial stream and the first frame of the new stream are received.

System recovery characterizes the speed at which a DUT recovers from an overload condition. To test system recovery, send a stream of frames at a rate higher than the recorded throughput and measure delay, then reduce that rate and measure the delay again. The system recovery time is the difference in these two delay times.

RFC 2544 not only outlines how to perform these six subtests in detail, but it also designates a specific format for the results. This standardization makes it possible to directly compare the performance of a variety of network devices.