How to Test and Ensure the Performance of Automotive Ethernet 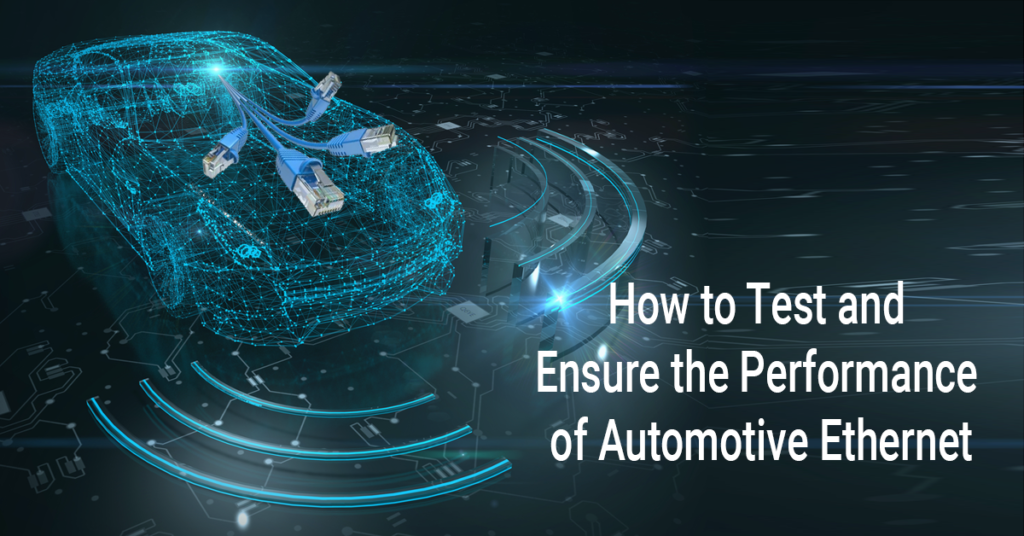 Today’s cars are expected to do so much more than just take you from point A to point B. With in-vehicle infotainment systems, on-board diagnostics, advanced driver assistance, and other safety systems, cars need to transmit incredible amounts of data simultaneously.

To accommodate this data load, new vehicles require much faster, more reliable networking than ever before, which has inspired advancements in automotive ethernet.

What is automotive Ethernet?

Automotive Ethernet is a physical, wired network that connects various components within a car. However, traditional ethernet could not keep up with the demands of emerging car technologies. In order to make ethernet viable for modern vehicles, BroadR-Reach technology was introduced to reduce latency, eliminate “noise” from physical sources in the car, and control bandwidth allocation.

Unlike standard ethernet that uses a dedicated transmit and receive path, automotive Ethernet employs a single twisted pair that can transmit and receive at the same time.  This enhancement not only improves bandwidth and latency performance, but it also reduces the amount of cabling needed which lowers the cost of implementation as well as the weight burden on the vehicle.

What is Automotive Ethernet Used For?

Many cars are already equipped with surround-view parking assistance, collision avoidance systems, lane departure warnings, and other safety features that rely on cameras and sensors. The cameras and sensors must be able to communicate efficiently to guarantee safety and newer BroadR-Reach ethernet systems help accommodate the higher computing and bandwidth requirements necessary.

Cars are also being outfitted with increasingly complex infotainment systems. From smartphone connectivity and Bluetooth to interactive video screens, cars are loaded with more applications and connections than ever before.  Automotive ethernet is designed to be flexible so as even as new technologies arise, the network can be easily reconfigured to successfully connect each element.

As we move closer to self-driving, autonomous vehicles, cars will be expected to connect to the internet, other vehicles, and even surrounding infrastructure simultaneously. This concept is coined Vehicle-to-everything (V2X) Communication.  All of this must be done using the same network, so it is essential that the network can meet bandwidth and latency requirements, as well as have the intelligence to differentiate and direct high priority communication over lower priority. Prioritizing safety-critical information over entertainment for example.

What are the Test Requirements for Automotive Ethernet?

To operate safely on the road, the network itself must be tested and each device’s performance needs to be validated individually and as a complete system. Proper testing of automotive ethernet should include the following:

Each of the elements of the RFC 2544 test methodology can apply to automotive ethernet testing. For example:

Throughput – Testing throughput helps determine whether there is enough bandwidth to accommodate the large amount of data that needs to be sent at the same time. What happens when the load is too great? Are the correct applications and protocols being prioritized? Did the failover successfully kick in?

Latency – While some applications can still perform well with higher latencies others will fail. Testing can pinpoint where latency starts to critically impact performance which is especially important for optimizing safety features.

Frame Loss – Understanding how frame loss affects performance gives insight into the quality of the user’s experience.  Which of the car’s features are more negatively impacted by frame loss and how much frame loss will cause complete failure?

Each new piece of technology, system, or protocol will require proper testing to validate proof of concept, verify consistent quality & performance, and ensure the safety of the consumer.  But there is one other factor that must be considered when testing automotive ethernet – security.

Introducing Ethernet and IP to automobiles exposes their systems to the same threat of attack as any other network.  In fact, many vulnerabilities are published publicly and hacking manuals already exist for many cars. It is imperative that car manufacturers build in systems to prevent intrusions and that those systems are thoroughly tested.

Traffic generators can send a large scale of various application traffic through an automotive ethernet network to benchmark the performance of both safety-critical features and infotainment systems. Test unicast, multicast, learning caching, and more by generating a mix of multi-media streams from 1000’s of simulated clients simultaneously. Verify that QoS policies are effectively directing traffic, routing high-priority traffic from cameras and sensors through the best performing links over less critical traffic.

Understand the impact that bandwidth, latency, and loss have on application performance, discover performance bottlenecks on the network, and test against heavy traffic loads to ensure every component that relies on automotive ethernet is delivering optimal user experience.

Advancements in automotive ethernet are opening the door for innovative technologies, and traffic generators can help reduce testing and remediation costs, speed time to market, and protect brand reputation by ensuring the best possible performance.